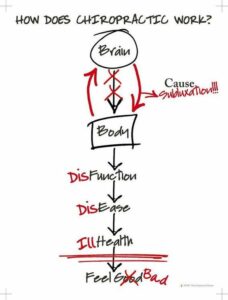 In 1895, a Doctor named DD Palmer discovered something that would change the health care landscape in the United States and abroad forever. This “discovery” was so profound it inspired the formation of the (now) 3rd leading healthcare profession in the world, behind Medicine and Dentistry: Chiropractic.

Men have gone to jail to practice it; families have been tormented, doctors harassed and forced into bankruptcy; children threatened and chastised for their parents profession; all over this new healthcare system that subscribed to something different:

The notion that you were designed to be well, that sickness was the aberration and that disease was a failure of your body to adapt to its environment, wasn’t widely accepted.  Simple concepts for sure but they disputed the traditional “medical model” or “pathogenic theory of disease” which stated simply that something got inside you (from the outside) and made you sick (on the inside) without mention of the health of the organism (human body). Fast forward to 2019 and the study of Immunology now confirms what Doctors of Chiropractic have know for over a century: The body is self healing, self regulating and self controlling. Health is an inside out job, not outside in. Drugs and surgery, while necessary at times, cover symptoms. They do NOT heal. Only the wisdom of the body can heal.

Healing is the job of the “Doctor Within” or your Nerve and Immune Systems. In our office, we adjust Medical Doctors, Surgeons,  Podiatrists, Physical Therapists, Nurses etc. who confirm for us that surgery and drugs don’t heal; they hope to remove an interference to the body healing itself. This is the same for a Chiropractic Adjustment. Except its non toxic, safer than drugs and surgery, inexpensive and Nerve and Brain stimulating (vs. depressing).